I remember 4 years ago, when my bel marito and I followed the 2010 World Cup games from the little bar near our apartment in our town in the province of Reggio Emilia. I remember the Italian team, ranked 5th by FIFA at the time, shaming their countrymen by first drawing with Paraguay and then New Zealand (!!), then eventually losing to Slovakia and being sent home. The newspaper headlines read “A CASA CON VERGOGNA” – going home in shame. In fact, the USA team technically outlasted Italy in the games, a fact which I was careful to point out to the bitter audience in the little bar.

In general, it was a pretty disappointing experience. This time around, however, I am fortunate enough to witness this shame from the perspective of the underdog beating the big, bad, Azzurri (the ‘Blues’ are how Italians refer to their team). My dad (a British expat himself) lives in Costa Rica, in a rural community on the slopes of the Turrialba Volcano, and my visit this year happens to coincide with the games.

We’ve been in a bit of a familial crisis here, really, with 3 out of 4 of the Group of Death teams being near and dear to our hearts. My English father lives in and loves Costa Rica, while I live in and am married to Italy… or an Italian… a small difference, you’ll understand, if you read my blog. England has botched it from the start, so we’ve lost faith in them. Italy seemed to be a solid option for our support, and may still be. But dang if Costa Rica isn’t the little engine that could.

It’s hard not to love the Tico team (“Tico” means Costa Rican), and Ticos in general. They’re a happy bunch that smiles a lot and doesn’t get too fussed about a loss. They don’t place a lot of expectation on their team, but when they do win the entire country erupts into celebration and delirium.

My first experience with this was this past Saturday. Costa Rica’s first World Cup 2014 game took place in the middle of the day against Uruguay, ending moments before my flight to Costa Rica was due to depart. In the little sports bar in DFW airport, which was conveniently located across from our gate, there were about 40-50 Ticos crammed up to the TVs cheering on their team. Each goal was met with cheers that echoed throughout the rest of the airport and sent people rushing over to our gate area. When they asked me what was going on, and I replied “Costa Rica is winning a cup game!”, there was inevitably a confused look and a discussion about whether or not Costa Rica was an island. “No. That’s Puerto Rico.” (Side note: I’m seriously concerned for the general competency of most Americans, but we’ll save that discussion for another day.)

Even though Costa Rica was miraculously up 3-1 when our flight attendants called us to board the plane, no one would leave the bar until the final minutes had been played out and they could witness with their own eyes the first Tico victory. There was a lot of celebrating on that flight! One man I spoke with explained to me that perhaps because no one expected to win, the team felt less pressure to perform and could really allow themselves to succeed. In our conversation, I came to find out that his brother is an ex-player for the Tico national team. THAT’s how small Costa Rica is. I just happened to be chatting with someone with a family member who played on the national team! We parted and he saluted me with the usual friendly wish: “Pura vida, enjoy your stay in Costa Rica!”.

Then, this morning, just a few minutes ago, I witnessed Italy suffer a well earned loss to this happy little Tico team.  And I must say… it was a lot more fun watching it from here than I imagine it would have been back in Italy! I was in text message contact throughout the game with my husband and friends back home and there was something I noted from the international perspective that I may not have noticed if I were watching back in bella Italia.

Ticos believe in their team but expect nothing. Italians expect to have their beliefs dashed.

Every Italian will tell you that they believe in the Azzurri because, well, you’d be a really horrible Italian if you didn’t. But when they lose, there’s a lot of blame handed around. Like a lot. And something about the evaluation of the team’s performance reminds me of how we speak of politics in Italy. “Occasioni mancate, poche idee” (missed opportunities, few ideas). 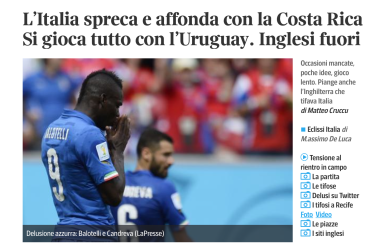 Costa Rica, as that man explained to me last Saturday, went into this game not expecting too much. Everyone I talked to here before the game said, “it would be really great to win, but even a draw would be good!” One guy in a little bar here near the volcano even whispered to me on the side, “a draw would even be good for both of our teams!”

They are so nice here. Seriously.

As the first half went on, I could hear shouts from all the houses in town every time the players got near one of the goals. But the biggest shouts came with the uncalled foul on Campbell that should have resulted in a penalty kick, and probably a goal. People started wondering if the erratic calling by this ref was a result of something corrupt or just ineptitude. I have to admit, I also found that call and the subsequent free kick for Italy in the second half a bit strange and dubious.

While I was naturally disappointed for Italy, I couldn’t help but smile and wave at the kids pouring out of the local school chanting “sí podedo” (a variation on the Obama Yes We Can slogan, meaning “yes, we could”). Apparently their lessons this morning consisted solely of supporting their national team. A worthy subject, I’m sure.

Readers, where were you while you watched Italy choke? What was the general reaction?

Here’s the game highlights by JMC TV on YouTube: