Fossacaprara, in the province of Cremona, is a little town that leaves a big impression.

Well, “town” is a generous designation. Technically it’s a “frazione”, which is a fraction or neighborhood of a town. However, as far as I know, the community there would prefer not to identify themselves primarily as natives of the encompassing comune of Casalmaggiore, but to instead specify proudly that they are from Fossacaprara (which literally and fantastically translates to “Goat Ditch”). The difference is vast between Casalmaggiore and Fossacaprara:  five flat kilometers, ten minutes driving past rows of poplar trees, and a whole lot of town pride.

My marito and I are long time admirers and guests of this little cluster of houses near the Po River in the province of Cremona, mainly because one of the 248 residents is a good friend and colleague of ours. He has asked that I help publicize the festival’s main event – Sbürla la Rôda – to my foreign readers, in the hopes of attracting a team from a foreign land into this fantastic competition.

Let me begin by explaining the amazing nature of this annual festival held every August at the local church of Fossacaprara.

What is the Sagra di Fossa?

Every year, at the end of summer, as Italians are reluctantly returning from their seaside Ferragosto vacations, the town of Fossacaprara holds this festival to end all summer festivals. It usually falls on the second to last weekend of August, which can be an awkward time for those who already have their heads back in work or for those who haven’t yet returned from holidays. However, missing this event would be a mistake of gross proportions.

Of all the small town festivals I have attended so far in Italy, this is by far the most fun, creative, and dramatic. Almost all 248 residents, of all ages,  join together to form the base of the volunteer group that organizes and operates the event. Last year (and I suspect all years to come) the entire event was operated ecologically, with specific volunteers assigned to collecting each recyclable material, and all of the flatware being biodegradable. This is no small gesture, and should be learned by other small towns (in my humble opinion). 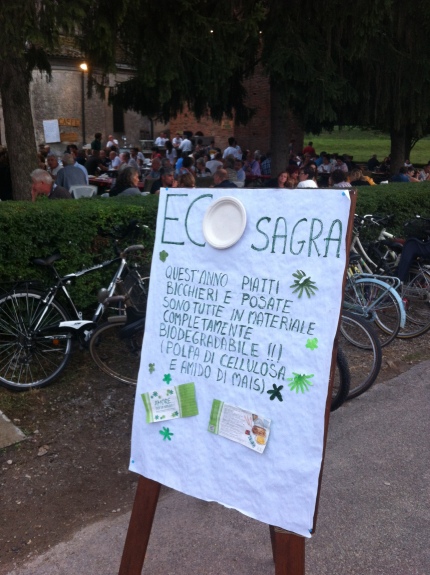 For the duration of the chosen weekend, there are games and events scheduled in between meal times. The wonderful cooks, who set up shop at rows of folding tables behind a bamboo screen, serve some Po Valley classics, such as carne grigliata  (grilled meats), salsiccia e polenta (sausage with polenta), and affettati misti con gnocco fritto (pork cold cuts with fried bread).

They also throw in a couple of game changers, such as trippa (no way to translate that nicely… intestines!) and frittata di rane (frog frittatas). Lambrusco, is of course available, as well as white wine and beer at the bar. Meanwhile, on the other side of the little fossa (ditch), there is another eating area with lighter fair – panini, etc.

‘Miss Capretta’ is no ordinary goat:

As you arrive at the entrance to the festival, you line up to pay for your meal ticket alongside the goat pens. Mind you, these are no ordinary goats.

These are the cream of the crop. Every year at this Sagra, the town holds a Goat Beauty Contest, where one goat is awarded the honor of being crowned “Miss Capretta”. I must admit, that I, myself, have fallen victim to the batting eyelids of one or two of these seductresses. As soon as we move out of this apartment, we are going to have to get a goat.

Over on the games field, there are a number of activities that stay open for most of the weekend. There are walking stilts, a big parachute, and a number of other toys lying around for kids to play with.  There’s also the mini colosseum, into which they let loose a bunny rabbit.

Whoever correctly guesses the number of the door through which the rabbit escapes wins a prize.

Battichiodo is a great game as well, with very simple rules: see if you can hammer the nail all the way into the board with only three hits ( a LOT harder than it sounds). I think they’re holding a dedicated championship to this event this year.

Another one of my favorites is the bottle fishing station. Kids line both sides of a table full of empty wine bottles with fishing poles equipped with rings at the end of them. Whoever snags a bottle first wins (it’s harder than it looks!).

The winner is then awarded, of course, a FULL bottle of wine… at which point the game moderator reminds them, “Remember to give this to your daddy, ok?!” (Fantastic.)

At some point in the evening, Damiano gets on the microphone and calls for everyone’s attention while they’re eating.

And so begins the salame betting.

They hoist a salame up by a rope attached to the top of the church bell tower, and let it dangle there for a few minutes while the audience members put their guesses in for the precise number of centimeters that the salame has been hoisted. Last year, I approached the mediators with my guess of 710 cm and was momentarily put on the spot as the only Texan (so far as we know) to have attended the Sagra di Fossa. Of course, now that will all change, as I suspect this article will launch the tiny town into a major tourist destination.

As dinner is wrapping up, the main events begin. The village’s position on the banks of the Po River in the Cremona Pianura means that at the end of summer it is subject to a somewhat dramatic micro-climate. It’s the end of a season, and the warm air that has been settling on the plains is suddenly and theatrically met with gusts of huge clouds and bursts of rain that soak everything in two minutes.

Depending on the evening, the main spectacle consists of either the Battichiodo Championship, the Tiro alla Fune or the Sbürla la Rôda. Since they are all fantastic, you obviously have to attend more than one day of this little festa.

Inevitably, as the games continue and the impending climax of the championship face-off nears, a dramatic storm cloud can be seen sweeping across the plains in the backdrop of the scene. More than once I have witnessed what seems like a movie set timing of a clash of thunder, a streak of lightning, and the sound of drums just as the winner is declared champion. 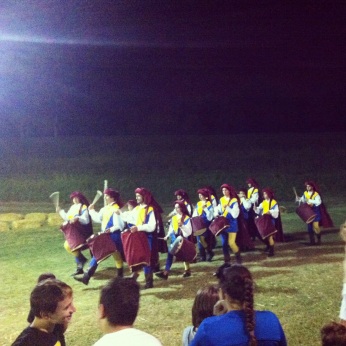 The Tiro (pull) alle (on the) Fune (rope) is split into three sections… Men, Women, and Family. The Women get a bit scrappy, the Families have a blast, but the Men… the Men… they take this seriously. There are teams. Tug-of-War teams! I had no idea! They practice. Throughout the year. They have uniforms! My mind was blown the first time I learned this.

You may have heard of the Palio of Siena, but for the life of me I don’t see why Fossacaprara’s Palio doesn’t have even more international recognition. It’s way more fun. Instead of boring horses, the men race large bales of straw around the track! As they round the corners, the spectators throw handfuls of flour at them, making for a lovely paste on those nights that the summer showers dramatically appear. 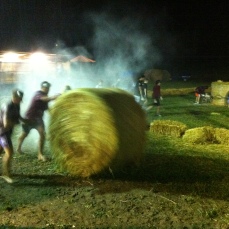 This year, Fossacaprare is hosting an exchange with the town of Pienza in Tuscany, sponsored by the Association of Ancient Games (an organisation which I think I may need to get involved with). Pienza will be showcasing their own game – Cacio al Fuso. I’m not totally sure what it is, but I believe it involves throwing cheese wheels! So yay for that!

In a separate event earlier in the day, separate from the Palio and following the OFFICIAL rules of Sbürla la Rôda (which neglect the flinging of flour), the championship usually sees some pretty serious contestants.

Do not take this sport lightly… accidents can and do happen: 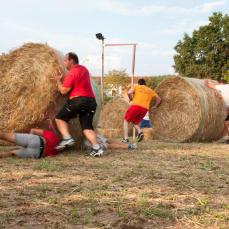 Luckily, getting run over by a bale of straw is not fatal.

AND there’s a good cause:

Just in case you’re not convinced yet, keep in mind that the proceeds of this festa are managed by the town’s own association, which has an ambitious 4-part plan aimed at improving the local cultural identity. 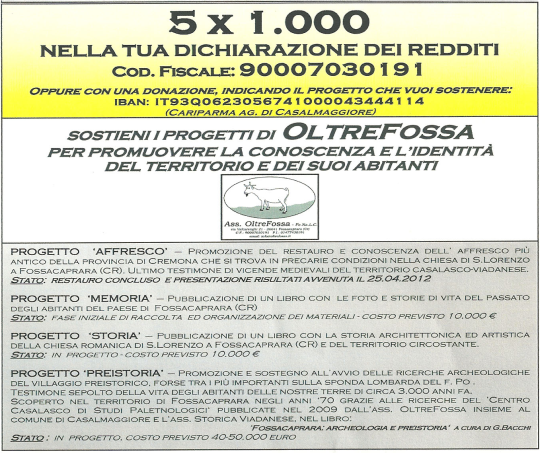 In the past they have restored the oldest affresco in the province of Cremona and supported archeological research on the inhabitants of their area more than 3000 years ago. They are currently sponsoring the publication of a book on the history of Fossacaprara, as well as one on the specific architectural and artistic value of their land.

I know. I know what you’re thinking…

“HOW CAN I BE A PART OF THIS WONDERMENT?!”

Here’s the official brochure with contact info for team registrations and an overall description of the events for the weekend.

In the oh-so-official rules of the Sbürla la Rôda (which I can email you if you would like), you can technically only submit a team under a location name… like your town name. However we may be able to work out something for Team Expat if there’s enough interest.

I’m kicking myself for not being in town this year to enjoy it, as we will be probably lost somewhere in the Aland Archipelago of Finland that weekend as part of our “To the Baltic and Back” adventure around the Baltic Sea.

I’m hoping comments will flood in telling me that you’ll all go observe this year and next year we’ll take Italy by storm with a Team Expat, Team America, Team UK, and Team Australia… (I know I’m missing some English-speaking countries there, but I’m playing a statistics game).

Do let me know if you decide to go – it is WELL worth the drive. I’ll put you in touch with the Fossacaprara Cultural Ambassador (a position I just invented), and I’m positive you’ll have a blast.