“F.I.A.T. = Fix it again, Tony,” was my uncle’s response to the story I’m about to tell. I was pretty sure that phrase was born out of some sort of prejudice against Italian-American immigrants back in the day (which would be funny since my uncle was one), so I went to check on it before typing it here. I found, instead, that many older generation Italians themselves use this popular English description of the most common car in the Italian market. I also was pleased to find many similar definitions for ‘Fiat’ in UrbanDictionary.com… my favorite of which is this one:

Fiat (noun): A female who appears to be high class, but in actuality is just trashy and high maintenance. Similar to the car of the same name. When used in a sentence: I met a girl Friday who seemed well bred, but when she got in a fight with that other chick, I realized she was a Fiat.

Well, this past Saturday, The One and I took our trashy girl into the Apennines to scout out the grilling situation for our upcoming wedding festivities. Just as the salsiccie started sizzling, a thunderstorm busted open and completely soaked us through and through. Our dog, Pilatomica, was in heaven… so much so that she took that opportunity to go for a swim in the lake and then roll around in the mud to make sure that the wet-dog smell (canius in our local dialect) was set in there really well.

We all piled into the Fiat to head back down the hills to home – about a 2 hour drive. Two hours. Two hours of canius smell wafting from the hatchback trunk of our Fiat Grande Punto. It could have been 1 or 1.5 hours… but our Punto is metano, meaning it’s a methane hybrid. Apparently, in order to install the methane tank, they had to take out the engine and install a small donkey in it’s place. I can run faster than our Punto on an uphill. If you’ve ever seen me run, you’ll understand the significance of that remark.

Anyway, when we got to one of the last hill towns and seeing as how we clearly were not going to make it down to the plains before the shops closed, we decided to pull over and run some errands. We pulled into the parking lot of a little hardware store on the main drag through town… and that’s when our trashy girl turned high-maintenance.

She wouldn’t turn back on. No warning, no flashing light on the dashboard… not even a sputter… zero sound, nothing.

Luckily, we were in a town instead of on the road somewhere. It being a Saturday afternoon right after a thunderstorm, all the old guys had just started emerging from their houses again to escape their wives by sitting at the bar all day. (By the way, I think that’s a whole subject that’s worthy of its own post. What do they do all day?!)  For them, two giovane (young people) with a broken down Fiat Grande Punto was just the thing to cure that Saturday afternoon boredom. 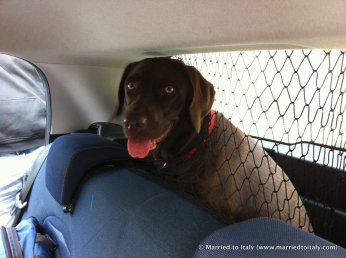 Saba got locked in the trunk, which apparently onlu opens if the electrical system is working!

At first there were two of them… one guy with a set of rusty old cables, and another guy who insisted on lecturing me on the similarities between cars and women. Charming. “Le macchine sono come le donne… quando sono fantastiche, sono veramente fantastiche… ma quando rampono le palle…” (translation: ‘Cars are like women… when they’re fantastic, they’re really fantastic… but when they bust your balls… ‘)… then he burst into laughter and slapped The One on the shoulder. At the suggestion of my death stare, The One did not laugh. And that is why he is The One.

Then they just started arriving like flies on honey. Before we knew it, we were the happening event. To add to it, we had mentioned to the lady in the hardware store that we were getting married (she had been nosy about some of our purchases for the camping reception). So pretty soon the information started flying around the group that we were engaged to me married… AND that the girl (me) was American! Oh the excitement!

Somewhere in the dysfunctional game of telephone that was going on around our car – between men all over the age of 70, most with obvious hearing deficiencies – the information got jumbled up, and they all started believing that we were actually on our WAY to GET married when our car broke down. The fact that we were wearing jeans and hoodies didn’t seem to factor in. Their efforts to fix our Fiat got serious now.

Someone yelled to call Vanni, the local mechanic… I’m not sure if that meant that there was a mechanic shop in town, or that he was a mechanic somewhere else but lived in town. So Vanni was called. Vanni didn’t answer.

One of the men eagerly hopped in his Fiat Panda to DRIVE to Vanni’s and see why he’s not answering his phone. Meanwhile, the charmer from before and his buddy were trying to hook up the rusty cables to our Fiat Grande Punto engine and their Fiat (normal) Punto engine. About twelve people offered to replace the relics with their newer cables, but they were all silenced by the first guy who assured them all – with the type of authority that can only come with being an elderly Italian man – that his cables were just fine.

The cables did nothing, and by this time everyone was really concerned that Vanni the Mechanic was not answering his phone. Little did they know that E had already resigned to the fact that we would have to wait until Monday to get our mechanic up there and had called his dad to come pick us up. I asked E if we should let these men know that we could just handle it later, and he sagely responded, “No, let them be”.

While waiting for the convoy to return from Vanni the Mechanic’s house, we discovered a neat little design feature of the Fiat Punto. Apparently when the electrical system fails, so do all forms of opening the trunk. The trunk… where the canius was. Our dog, S, was trapped in the trunk. Disaster.

When the Fiat Punto returned with no Vanni the Mechanic, the men did what had to be done.

Only when they were assured by the mamma that Vanni the Mechanic would be unreachable for the rest of the day, did they turn to us with a look of defeat and say that they were sorry they could not help, BUT that they would keep an eye on the car until Monday (which I am sure they did).

At this point, the nosy hardware store lady piped up and suggested that we move the car from her parking lot into the neighbors (who were conveniently away). It was decided by the group that the big strong, able-bodied (elderly) men should obviously be the ones to push the car. And for lack of better options, I – the American female – would need to steer it into the neighbor’s lot.

And it was with the sound of derogatory and sexist remarks and cheers that I was able to somehow overcome my femininity and pull into a parking space. We bribed Pilatomica with a food treat if she would jump over the seats, an action for which we have previously scolded her for trying and for which I am positive she will have excellent memory.

Monday morning, The One returned to the town with our mechanic… who advised us that it would need to be towed for a mere 250 euros to his shop. Only 36 hours later, we were informed that it WAS, in fact, the battery… and if we had only had cables… it would have been able to start.

This is my life in Italy. You can’t make this stuff up.