How do you tactfully beg this of your fiance’s brother at their mother’s dinner table?

This was the task I was charged with one memorable evening two years ago.

We were summoned to a dinner meeting of La Famiglia one evening, with hints of a big announcement under foot. I had already noted a certain glow in the wife of my then boyfriend’s cognata (sister-in-law), and I had pointed out that her clothing had been getting looser in the stomach area recently.

So, when the news came across the table that a new little member of La Famiglia would be joining us soon, I was excited more than surprised. There was a lot of cooing and questions flying back and forth across the table. Smiley faces all around and baci for everyone.

Once we all got seated again, someone asked if they had started thinking about names. Apparently they had… quite a great deal, in fact.

It seems that La Famiglia has a long tradition of names that are considered somewhat antiquated or formal, often in a kind of grand way. I won’t get into all of them for reasons of anonymity, but think along the same lines as ‘Theodore’ or ‘Edison’ (as a rough equivalent to the order of grandeur).

Meanwhile, my cognata preferred much more popular names, along the lines of ‘Samuel’, etc.

Apparently they were having a tough time finding one that they could agree on if it happened to end up being male. After weeks of discussion they had finally settled on one name that had traditional Emiliana roots, but sounded perhaps a tad more modern than the other suggestions.

My boyfriend’s brother, as he was standing over the table serving out some pasta into everyone’s dishes, announced that they really liked the name “Enos“.

Let me repeat that with an Italian accent…

Phonetically we’re looking at something more or less like “Anus”.

As soon as the name was said, I literally inhaled a noodle. Then followed a somewhat embarrassing choking and coughing spurt. As if that weren’t bad enough, amidst my recovery, I asked “You’re joking, right?” (A little part of me really thought he was joking). 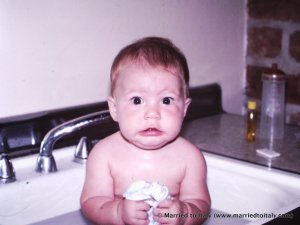 M with look of horror

You know how Italians can stare at you as if the thing you just said was the most offensively absurd thing that anyone has ever uttered? Well, I felt like the whole table was looking at me like that… (one of MANY moments like that in the life of any expat).

Then came the worst part. It’s not like I could brush that off and move past it. I then had to sit there and, in my broken Italian, explain to La Famiglia that the word ‘enos’ sounded a whole heck of a lot like a particular nomenclature for the exit door.

I had NO idea how to appropriately or politely say ‘butt hole’ in Italian, my then boyfriend did not immediately get what I was aiming at, and so there was this awkward two minutes of me point to my butt and them saying things like, “chair? seat? pants?”.

If a lesson can be learned from this experience, it is that you should screen all baby names with any major language you come into contact with on a frequent basis. And, really, all Europeans at the very least should be screening for English.

Can you imagine when Enos goes to high school and all the other kids start calling him B.C., short for ‘Buco Coulo’? Disaster.

Thank goodness my argument was convincing, and my now nephew has a very lovely name. When he turns 18, I will tell him this story. He will thank me.

8 thoughts on “Please, please, don’t name your baby something that translates to ‘butt hole’ in English.”