Some of my more loyal readers have expressed concern that I may have drowned in the Baltic Sea during my Ferragosto 3-week road trip through Austria, Czech Republic, Poland, Lithuania, Latvia, Estonia, Finland, Sweden, Denmark, and Germany.

Fear not! I am simply drowning in work since my return, and every time I come to write to you here, I am overwhelmed by the quantity of material that warrants this blog’s attention and your comments.

Where shall I start?

My bel marito and I had left Reggio Emilia at the beginning of August in a hurry to get as far north as possible before abandoning the highway at the Austrian-Czech border in favour of smaller, more personal roads. We stopped in Vienna for 2 nights to visit some good friends of ours, who I now credit with alerting me to the existence of the Eurovision competition.

Now, either I’ve been living under a rock, or they really don’t report this much in the US news. Out of fear that the former was more accurate, I looked it up. Here’s the intro explanation from CNN:

It’s not just any old talent show, it’s an institution — an annual event that attracts an estimated global audience of 125 million. But to the uninitiated, the Eurovision Song Contest can seem a mystifying cultural anomaly. Each year, this relic of the post-war era inspires scores of camped-up performers to perform even camper songs in a self-conscious display of continental unity.

But don’t let that put you off. From Sweden to Spain, Portugal to Poland, the show gathers an ever more devoted following each year — and 125 million people can’t all be wrong, can they? So, if you haven’t seen it — and don’t know the first thing about what you’re missing — keep reading.

I mean, with that kind of intro, how could Americans resist?

Our Austrian friends then showed me the amazing video of the Austrian, bearded, transvestite singer, Conchita Wurst, who brought pride back to the music capital of Vienna by winning this past Eurovision competition with a song that I am told time and time again is nothing short of amazing. I leave that to your judgement:

You know how when you learn about something new – something so big that you feel foolish for never having heard of it before – you then see references to it EVERYWHERE and you think that you must have been crazy before?

Well, that’s what happened with me and Eurovision. References to previous winners and competitors popped up all over the place. Friends started mentioning it in conversation, when I swear I’d never even heard of it before.

Anyway, after Vienna (which I will dedicate a separate post to), we headed up to the Czech border and got off the highway… ya know, so we could experience the real countryside, and then through Poland with the intention of visiting the Bialowieza Forest.

Before heading into the forest, we spent the night in a hotel in the town of … hang on … how the hell do you spell it ….

A town that was largely destroyed in WWII, and it’s Jewish inhabitants almost completely wiped out. (Again, I will dedicate separate posts to these amazing and interesting places… for now let’s focus on important things, like music videos).

As we were getting ready for bed, we decided to check out the local TV options, and this little gem stopped us in our tracks. I ran for my iPhone to get a shot, mistakingly thinking that it could be lost in obscurity forever if I didn’t record it immediately. In place of the poor quality video I took, I’ll show the highlight reel in screenshots: 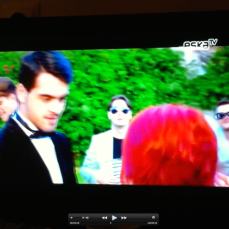 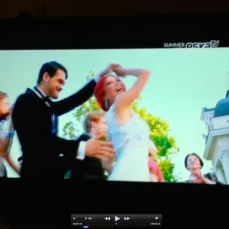 And here are the words that make up the lyrics to a song, which we have now decided is our new favorite. OF ALL TIME.

His name is Tony. He’s from Milano. He whispers softly in my ears in italiano. He never leaves me ‘cause I’m his Cinderella. He say that I’m his only one and molto bella. He follows everywhere I go and calls me baby. This little gigolo has got me going crazy. I just can’t get him off my mind; he’s so amazing. My heart says “yes”, my mind says “no, just let him go!”

He says, “I love you. Girl, let me touch you.” But mamma told me that italians are macho. He says, “come love me. Don’t listen to your mamma”. And I just hope that it’s not gonna end in drama. He follows everywhere I go and calls me baby. This little gigolo has got me going crazy. I just can’t get him off my mind; he’s so amazing. My heart says “yes”, my mind says “no, just let him go!”

Now, for the grand finale, please allow me to show you the best music video of all time, with over TEN MILLION YouTube hits:

Side note: This singer apparently has made her whole career off of cultural stereotypes. SHE was a Eurovision competitor (see how it all comes full circle?) and represented Romania with this fantastic summarisation that might help explain why Italians think Eastern European girls are whores:

9 thoughts on ““His name is Tony. He’s from Milano. He whispers softly in my ear in Italiano.””